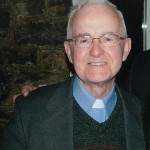 Our Parish Website is Fr. Micheál McInerney’s legacy to the parish of Quin Clooney Maghera.  It is dedicated to his memory, forever living in our hearts.

Micheál Thomas McInerney, son of Patrick and Nora was born on 21st December 1924. He was the younger of their two children, his older sister Maureen has also sadly passed away.

Fr Micheál was baptised by Fr S Slattery in St Mary’s Church Quin, his sponsors were Elizabeth Goggin and Michael Clune. Fr Joe Carey gave him his 1st Holy Communion in the same church on Corpus Christi 1931 and was confirmed again in the same church on 24th May 1934 by Most Rev Dr Michael Fogarty. He was ordained to the Priesthood in St Patrick’s College, Maynooth on 18th June 1950 and said his first Mass in Quin on 20th June 1950.

After ordination he served in Warnstead and Grays in the Diocese of Brentwood. He returned to Killaloe Diocese in 1954.

He served in the following ministries: