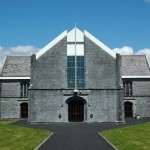 Adoration of the Blessed Sacrament: Weekly Adoration that takes place on Thursdays in St. Mary’s Church, Quin will cease due to current restrictions. A Holy Hour will take place every Thursday instead from 12noon-1pm. This Holy Hour can be viewed on the Parish Webcam or tuned into on the Parish Radio Link.