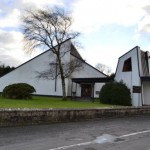 Clooney Church will remain closed until restrictions are lifted.